In doing research for Dinogeddon! I've come across a bunch of really interesting articles about feathered dinosaurs, or dinosaurs with primitive feathers. I find it pretty fascinating because I never knew there were so many specimens out there, and possibly even more we might not know about. Here's some articles if you're interested in that: Feathered dinosaurs on Wiki  Evidence of feathers on early dinosaurs - Nat Geo news 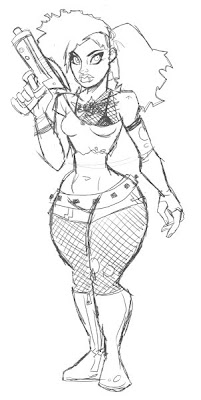 Don't really like the second girl's outfit...probably fix that later. 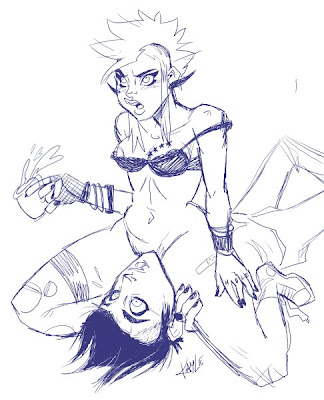 Haha...I was thinking about putting a scene like this in the comic, but I don't know if it would be in bad taste. Or maybe that's a good thing. :p Not sure what Ronnie's raving about, but she's really shaking that tea cup around!

these are great! MORE DINOSAURS! ;)

what about your other post-apocalyptic characters, Nyla and Sidney? could they be in Dinogeddon, too? i think Nyla is especially awesome.

Haha yeah I actually miss drawing them....I was actually planning on using them in another post-apocalyptic comic (I see a theme here!) set in Detroit. I thought it'd be interesting, since Detroit is already kind of post-apocalyptic lol so I wanted to explore what would happen if a city suffered a double-apocalypse.

But yeah, I never really fully fleshed out that story, and they would totally fit into Dinogeddon! so I might have them in it!! :)