Corey and Jenelle from Teen Mom 2 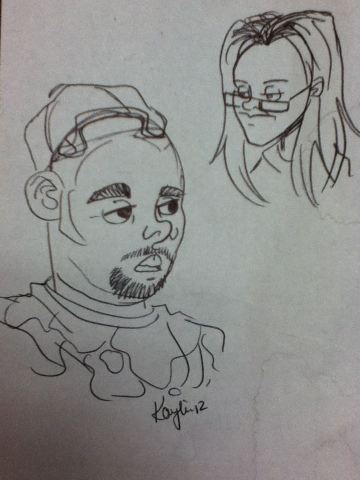 Sailor Moon and a sugar packet 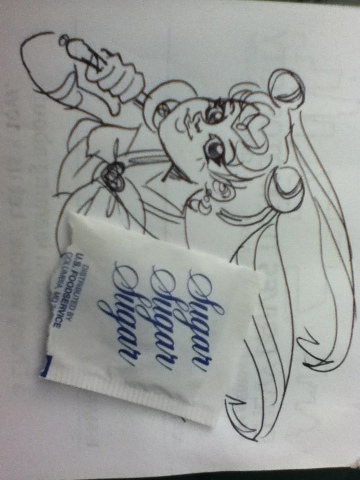 plus, i got this in the mail last night! Battle Kittens: the art of R. Dart. i strongly suggest everyone get it, as her art is mind-meltingly good, as is her Battle Kitten stuff, which i really hope develops into a full-blown comic or animated project some day. apparently she was a background artist for Mission Hill and is now a character designer for My Little Pony: Friendship is Magic, two of my favorite animated series ever, so that could help explain my fondness for her stuff. 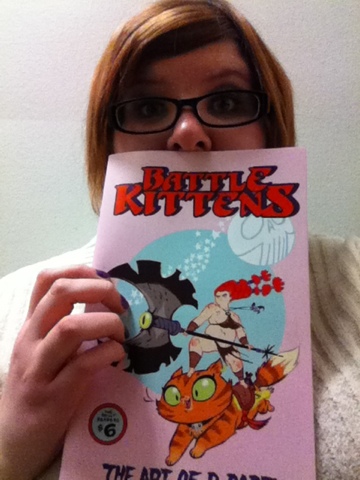 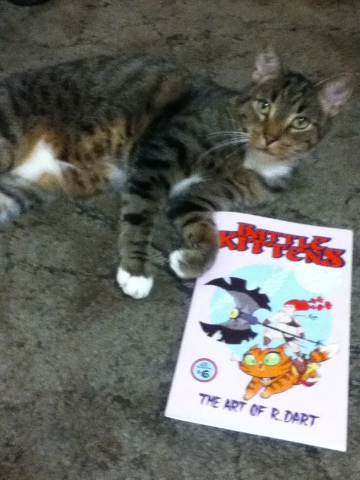 how easy it is to invent a humanity 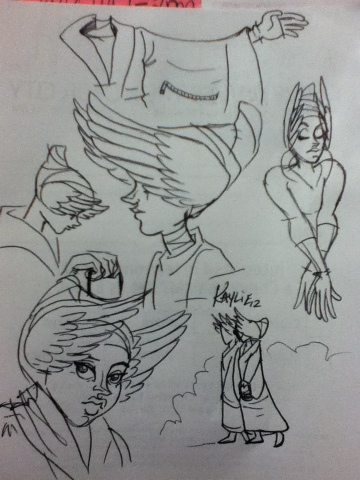 costume concepts/fan art from the Handmaid's Tale by Margaret Atwood. maybe i was a little too literal with the "wings" described on the handmaid's head coverings, but it's what i pictured while reading it. i'm a little indignant that this book isn't as popular as other distopian novels of the era, like 1984 and Brave New World. personally I find it a lot more riveting and better written. 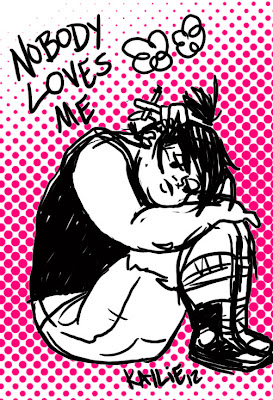 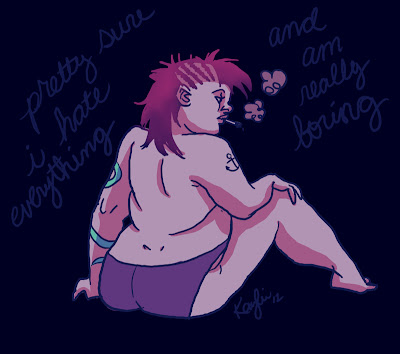 i used to be really into astrology when i was young....recently i've started reading my horoscopes again. i realize it's superstition, but it seems to be really accurate for me. my sun and moon are both in Aquarius, so i'm like Aquarius extreme!

(most relevant passages boldened for emphasis)
Original, knowledgeable, competent, has strong opinions. Likes freedom, enjoys reading. Hates mediocrity and incompetence.
In many life situations, the Moon in Aquarius people have their own, distinct and sometimes very original opinion, and they are not going to change this opinion no matter what, even if they will be left completely alone. It is very important for these individuals to retain their independence. They don't want their personal life to be anybody else's concern.

Often the Moon in Aquarius individuals have some outstanding abilities in one or another field, and they work like a magnet for those people who share their interests. This is why so often they take a central place in the company of like-minded friends. And even there they somehow manage to keep their uniqueness. They are not mixing well with the other people, they are together with them, but still alone.

As a result of their character, quite often the Moon in Aquarius folks can become really alone in their personal life, and their constant urge for independence can lead to chronic emotional stress. Hence their susceptibility to the disorders of nervous and circulatory systems, as also those unpredictable changes in their mood. There is an impression that at times they are getting tired of themselves, and to get rid of this tiredness they are trying to change abruptly, as if to become a different person.

To restore after a significant stress, the Moon in Aquarius persons need to have a hobby which they could plunge themselves into, forgetting about the surrounding world. It would be really good for them if they could speak out their problems, but this is not so easy, because Lunar Aquarians do not like to just chat with anyone about anything. They prefer dealing with experts in their field of interest - this is with whom they are ready to talk endlessly. And if there is no such a person around, a good book could serve as a replacement for a friend.

The Moon in Aquarius parents can be very original. From the early years they will make clear to their child that everyone's individuality is precious, and everyone should be independent. As a result, their kids might not be always properly fed or dressed, but they will become self-reliant earlier than their peers, and their talents will develop more successfully.

i finally got my fakie Blythe this weekend and started working on her immediately...i carved her face a bit, took out all her old eye chips, pulled out her old hair and sewed in new hair wefts, and spray painted her head and body and eyelids. 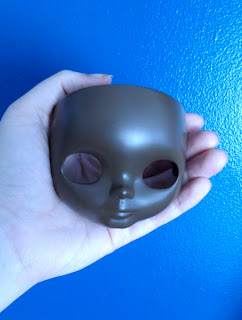 i'm really pleased with the paint job; it came out beautifully! i used SEM spray paint in bluebird brown, and i'm so impressed. i heard stories of modders having trouble with the paint remaining sticky on the body/legs, but i had no such problem. even though i sprayed it on a little too thick at times, she still came out perfectly even and dry! and i love the color. i was afraid it might look too unnatural, like grey-black, but it's a warm, rich brown, like chocolate.

her hair is what's giving me the biggest problem. i did the lock and loop method for making hair plugs on my first custom, Vi, but i did a few too many so her hair is unmanageably thick, not to mention the process takes forever. so i decided to try using hair wefts as they're "meant" to be used, and sew them directly on the scalp...it did save a lot of time, but maybe i didn't do the rows close enough together, because the hair is very thin and no matter how i comb it, you can always see the tracks of the wefts/scalp through the hair somewhere. sigh. i'm not sure what to do to fix it...i guess i'll have to order some more hair and try filling in the gaps, being careful not to make it too thick, like Vi's.

speaking of Vi, after getting frustrated and having to stop working on nameless new doll's hair, i was inspired to go through with my original idea and cut Vi's hair into an asymmetrical bob with some side bangs, and i flat-ironed the crap out of it so it doesn't have those annoying little plugs poking up like before. 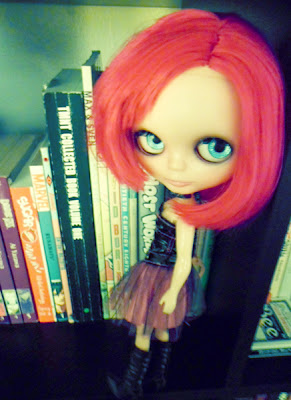 i think it suits her a lot better. for a while i was really unhappy with her, after learning so much more about modding, that i thought about taking her apart and starting from scratch (but that would be almost impossible, since i glued her scalp on), or even selling her, but after giving her this little hair cut, i'm satisfied. i think next i might replace her eyelashes, and i'll be content. she's not bad for a very first mod, i think. ;) 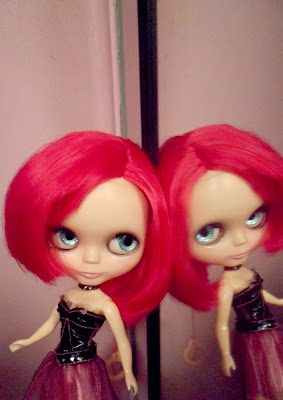 i got a bunch of new clothes recently too, hence Vi's awesome new dress, so i decided to stop neglecting Astrid and dress her up too. 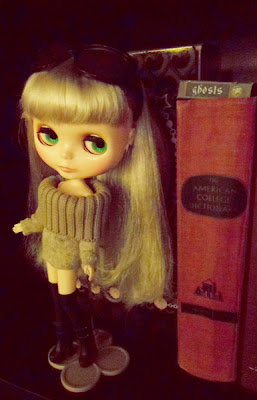 i love this sweater on her! i wish i had one like it in real life, heheh. Astrid is so elegant and perfect the way she is, i don't think i could ever bring myself to mod her.<3

so, now i have all three kinds of dolls - a real, authentic Blythe (Astrid), a Basaak knock-off (Vi), and a Color Change Eye Doll knock-off (new nameless doll). Blythes are of course amazing, the quality is so astounding and impressive, but they're so perfect that it's hard to bring myself to think about modding them, unless it were a bait Blythe or something. especially with how expensive they are. so for modding purposes, i plan on sticking to the knock-offs. most fake Blythe enthusiasts seem to prefer Basaaks, i guess because their mold and bodies are most similar to real Blythes. but after working with both, i think i actually prefer the CCE doll. she may not be as close to the real thing, but i actually find her slightly different body shape cuter. i like that her arms are ball-jointed, and it doesn't bother me that the waist doesn't turn. it seems a lot easier to open her head and take apart her eye mechanism; in fact, the plastic for the CCE dolls seems way more pliable and forgiving than the rigid plastic of the Basaak. i also love how breezey it is getting her eye chips out compared to Basaaks - just pop 'em out with a melted glue stick, instead of having to drill into the chips with a hot screw, then work on trying to get all the eye chip shrapnel out of the socket...ugh, what a nightmare that was!

i also got a bunch of dolls (mostly Maxies), some clothes, some Littlest Pet Shops, and a Fantasy Filly from my parents' house that i need to go through. sigh. almost thirty, and i'd still rather just sit at home by myself and play with toys. and watch Jem.

Posted by Kaylie at 1:36 AM 1 comments | Permalink

waiting for some action 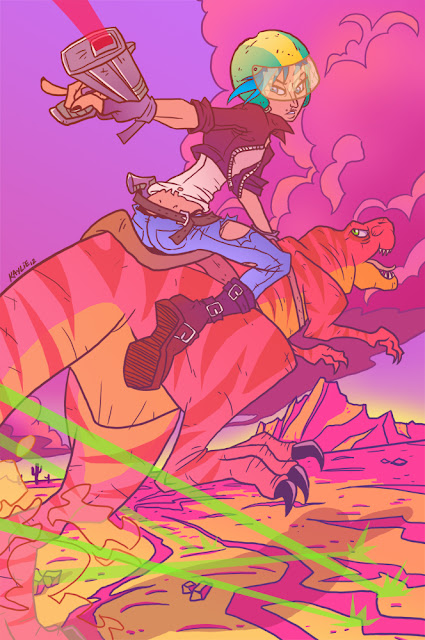 hey, i finally finished something! i drew this months and months ago and just now got around to finishing it. i experimented with the colors a bit so i could color faster...hopefully i didn't sacrifice quality too much. it's Fuss and her raptorex. i have pin ups planned for every member of all the gangs in Dingeddon...it'll take a while, but i'll get to 'em all. ;)
oh ! i was also a guest on my friends Ross and Nick's podcast: the Ernest cast, where we review Ernest movies and talk about other stuff, and our comic projects, and i talk about Dinogeddon for like a second, hehe. so check it out! 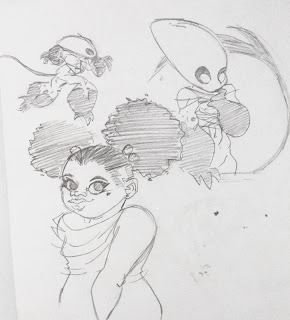 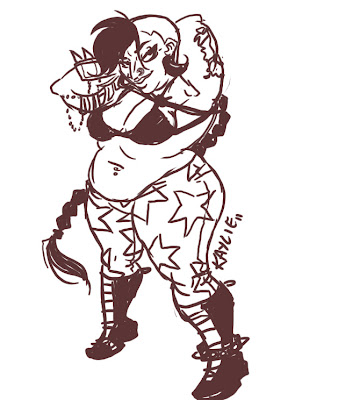 new year's resolutions....i have a few. mostly i want to be more productive. :p