They gave me back Salem's body in this little cardboard coffin thing. I opened it up to pet her one last time. She looks really peaceful, like she's sleeping. The people at the vet were so nice. They hugged me and told me I did the right thing. They gave me a little clay disc with her paw print in it. And a little kitty angel pin. Part of me desperately wants to believe there's some kind of magical, wonderful afterlife, not for me or even for people, but for kitties and other animals at least.


Today we buried her in the backyard by the tiny maple tree. It was hard because the ground was frozen. But I think she'll be happy there. I miss her a lot and the house feels so empty without her dumb little meows and following me everywhere. But I'm feeling better, and slowly the guilt and "what ifs" are starting to fade. I like to think I gave her the best five years together I could, for as long as I could. And I know she did the same for me.

I hope this doesn't mean that I'm a terrible person, but I'm considering getting another cat. Not because I want to replace or forget about Salem, but I think having a new kitty to focus on will help me cope and get on with life, and to keep the house from feeling so lifeless. I was thinking of getting a completely different cat from Salem, like a male tabby or something, but I like Bombays so much I'd really like another one. I also learned that black kitties are the least adopted and most euthanized of all cats, which compels me to help more kitties like Salem. Right now I'm looking at this little girl. 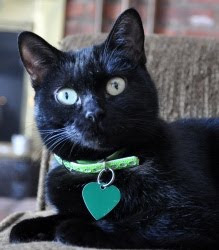 Making arrangements to meet her and her foster family this weekend. We'll see how it goes I guess. Also working all weekend. And trying to get started on all my comissions. Thanks again, everyone.

you're not terrible for wanting another cat, no way. it doesn't mean you ever have to forget Salem!!! i think it's great. :) i guess i could see why black cats are the least adopted (bad luck, maybe? heh) but also most euthanized? is there some kind of health problem(s) that is found in them a lot?

i've never heard the term Bombays before, are those a specific type of black cat or ALL black cats?

i hope you're doing well, you sound like it, or as well as you can be. good to hear. :)

i think the term "most euthanized" means that they end up being euthanized more than other types of cats because they're less likely to be adopted. nobody's really sure why; it could be the superstitious factor, or some people say they're hard to see in darkly lit kennels, or thay just don't stand out as much as cats with colorful markings.

bombay's a breed of cat! :) i learned about the breed myself after having salem, and becoming curious as to what breed or mix of breeds she could have been, and she fit the bombay archetype perfectly.

the thing i like most about them is that they're super sweet, and have weird little meows. XD

i am doing better, thanks. :) thanks so much for everything.<3

Oh man, I never knew what happened. I'm really sorry. I had just lost my kitty back in December. I'll never forget holding his paws and petting him while he passed away. There's totally a kitty heaven. I'm skeptical that something that brings so much love and joy couldn't live forever.

I actually finally got a new kitty back in September. When I brought him home the first thing he did was find my old kitty's spots and sleep in them.