okay, i need some help, guys! (if anybody still reads this blog....)

here is the latest Dinogeddon page i just finished: 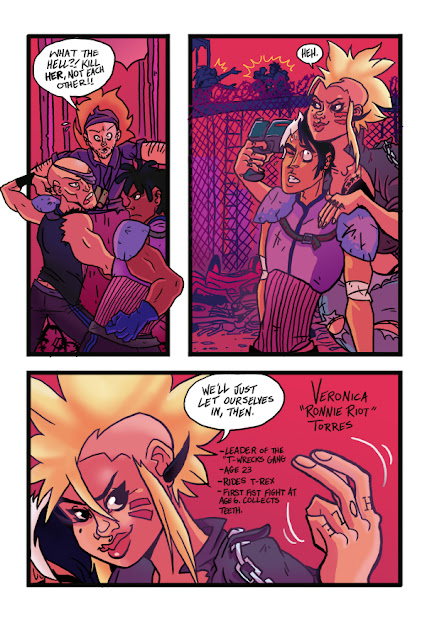 i'm not sure if i'm happy with it, and i'd like some input before i'm done for sure. in the last panel, i have a little introductory blurb about Ronnie, obviously. i plan on having similar blurbs for all the main characters. the main reason is because it's a pretty big cast, and while i think everyone looks different enough, i wanted to give readers some tidbits of solid information they could grab onto to help them identify all the different characters, and help them keep track of who is in what gang, etc. and i thought it would be fun and maybe add a bit of humor to add an irrelevant factoid or two linked to the character's personality. but after getting the ball rolling with Ronnie's here, i'm beginning to second-guess myself whether it's a good idea or not, or if so, if i executed it properly.

i know my handwriting can be hard to read, but i like the look of my hand written lettering for the comic and don't really want to use a font. (and yes, i have tried making a font out of my handwriting, and it just ended up terrible.) i thought about having the blurbs in little boxes, but i was thinking that might be too cliche? i don't know. maybe it would be easier to read that way. and like i said, i'm wondering if i should do the whole blurb thing at all? maybe it would just be better to let the characters unfold for themselves over time? i don't really like it when comics have to have bio pages or whatever, unless it's like a series catch-up kinda thing, and eventually i'll probably have a character bio section on the Dinogeddon site, but....like i said, it's one of those ideas i originally really liked, but i'm not so sure comes off as well in practice. what do you think? keep it, lose it? change it? and how?

Personally, I think you've pulled it off well. I'd give the box thing a try, I think. It's a bit of a cliche, but sometimes that's not a bad thing, I think. As long as it's not overdone, it can help to give things a kind of characteristic feel. Random idea you can feel 100% free to ignore, might be fun to put Ronnie's measurements in her blurb, as play of her using her boobs as a distraction earlier?

i think the bio factoids are cool! i like that you have them more straight-up cold hard facts, like yeah, she's the leader of the T-Wrecks, no misinterpretation possible there. and i like first fist fight at age 6, hehheh. you put it well, having little things for readers to grab onto, i like that.

i don't know if i agree with Luke that including Ronnie's measurements would be good, but you could pull that off. the only thing i had to critique on this page is the motion lines around Ronnie's hand in the last panel, i found it confusing. i think i get what gesture she's making, like "come on let's go" but at first i thought she was shaking her hand or doing some kind of jerk-off motion, haha. i think it would be perfectly clear what she's doing without the motion lines.

Luke: thanks for the feedback! i might give the info box a try and see how that turns out. i don't really like the measurements idea, because i actually don't want to objectify Ronnie too much, and i'm kind of ashamed and regret the having her trick the guards with her boobs thing, heheh. but i get what you're saying, it would be a kind of funny tongue-in-cheek thing, but i also think people might take it literally, like yeah this character is all about titillation and you're supposed to objectify her, so i wanna try to shy away from stuff like that. :) thanks for the encouragement and support as always, Luke!

Ross: thanks!! i'm glad you liked it and didn't think it was too confusing or whatever. haha, i see what you're saying about the motion lines, that was actually a smaller concern of mine, that they might be confusing...i have a problem with motion lines where i think i overuse them too much when they're not really necessary because i'm not sure my action is easily read.

I'm so happy that you updated your comic! I actually really love the handwritten words instead of a font- I always prefer that in comics. It gives it so much more of a feel that I like- I'm not sure how to articulate what I mean but I like it!

Also, I really like the mini-bio thing. It reminds me of when they do that in movies. I especially like the tidbit about her first fist fight and collecting teeth. It has a lot of personality. I say forgo the box and keep it how it is. :)

I like the little blurb thing, and I think it's good without the box. The box would make it corny, I think. It's easily readable, it got a good chuckle out of me, and I think it helps develop the character in a unique way...