i love cartoons, but particularly ones that push the envelope and go a little above and beyond typical wacky cartoon hi-jinks. i'm really not into those older merrie melody/warner bros. shorts where 99% of the comedy comes from parodying and spoofing famous people and movies of the day. i understand why it was popular and humorous at the time, but honestly i don't get a majority of the references, and secondly i prefer for any kind of media, really, to have a timeless appeal. for these reasons, i much prefer the later Looney Tunes, especially those directed by Chuck Jones, Friz Freleng and Bob Clampett.

Bob Clampett might be my favorite animater/director ever. silliness and weirdness are cartoon staples, but he knew how to push it above and beyond, making a joke or gag that was merely funny and weird into something really laughably outrageous. 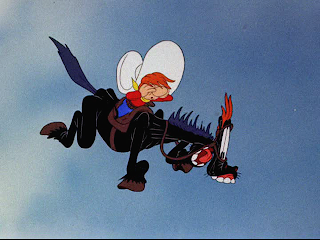 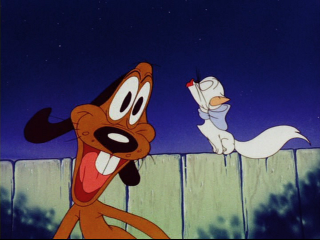 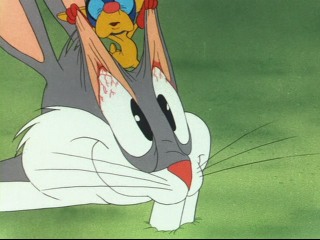 one of the things that first got me about his stuff is how far he was willing to stretch the very physical limitations of reality for the sake of ridiculousness. walls, doors, props, whatever, became the consistency of rubber. and his expressions and poses! look how great and elastic they are! 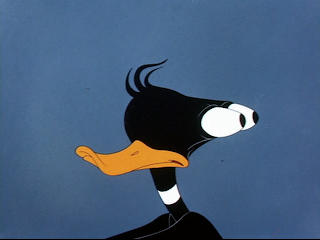 what an awesome wild take on Daffy! Clampett knew how to use Daffy to his full potential, and made probably my favorite Daffy cartoons, even better than the Chuck Jones duck season/rabbit season ones. though it doesn't ever fail to amuse me the endless and creative array of ways Daffy's face gets rearranged every time he gets blasted. but i digress. 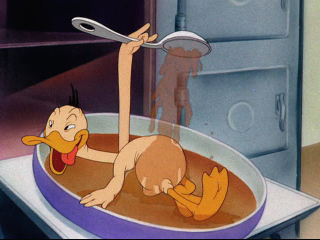 in this cartoon, i love how giddy Daffy is as he bastes himself with gravy at the end. XD it's so funny, and dirty at the same time! 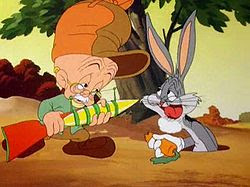 apparently it's impossible to find a video of, but this is one of my favorite Looney Tunes ever, "Old Grey Hare" from 1944. The dialogue is just so snappy and right, and Clampett milks every bit of comedy out of an aged Bugs and Elmer Fudd, taking the expressions and actions to a new extreme with their gummy mouths, furrowed brows and rubbery wrinkles. i also really love the facial hair choices of Elmer with a cookie-duster mustache and Bugs with a cottony Red Fox beard.

but my absolute favorite subject to explore in animation is malice, rage, mental breakdown, violence and craziness. while there were probably other animators technically better in other ways, to me, Clampett was one of the first animators to really master exploring the darker side of human emotions in cartoons, and exploiting them for comedic effect. 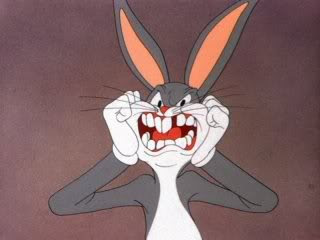 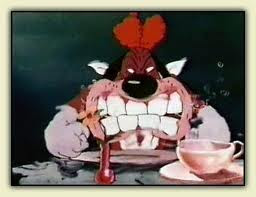 (i particularly love the cartoon with this dog. he's probably supposed to be a parody of someone with his weird, floppy hair and accent, but he stands alone as a funny character. i love that the majority of the cartoon takes place underwater and he and Bugs Bunny can inexplicably exist without breathing just fine.)

the only other animators i can think of that come close to Clampett's brilliance at capturing rage and insanity are Tex Avery and John Kricfalusi. it's hard to find Tex Avery's stuff online for some reason, and while he mainly stuck with more traditional cartoon idioms, he won my heart with how far he was willing to go to keep topping a gag. i have in mind one scene in particular that practically changed my life when i saw it, but again, i can't find it.

while Clampett and Avery were both extremely talented in their portrayals of  intense inner turmoil, it was almost always from a place of slap-stick and good-naturedness, whereas John K. took his influences in a directly darker place. the cartoonishness of his characters and ridiculousness of the situations softened the blows just enough to make them funny, but what i love about John K.'s animated sequences of Ren losing it is that often times you're unsure whether you should be laughing or not.

Ren: "i'm So Angry" - YouTube
this is probably the scariest and most threatening Ren's ever been, so much so that Nickelodeon forced edits to portions of his descriptions of what he plans to do to Stimpy and Sven. i love the juxtaposition of teetering between funny and flat-out disturbing.

Happy Happy Joy Joy - Dailymotion
probably everyone is acquainted with this episode or at least this song, but it amazes me that some 10-15 years later, it's still hysterical to me, particularly the seemingly crazy, non sequitur ramblings of Stinky Wizzleteats in the middle of his song (which apparently are all quotes from children's songs and a Western movie by Burl Ives, who Wizzleteats is a parody of). the whole episode is really good, particularly the parts where Ren fights the power of the happy helmet and loses, and the preceding scenes in which he is constantly insane with happiness.

Ren: "THESE HANDS" - Youtube
this is probably my favorite insanity sequence from Ren and Stimpy. to me, the threats of Ren's violence and his maniacal ramblings were much more disturbing than any of the actual cartoon violence he inflicted on Stimpy. i love how it actually goes there, with Ren contemplating breaking Stimpy's neck in his sleep. XD

edit: oh yeah, how could i forget Space Madness?? i think Ren's first great insanity sequence. it contains two of my favorite quotes: "it is not i who am crazy. it is i who am MAD!" and "we're not hitch-hiking anymore! we're RIDING!" XD

besides the dialogue and exaggerated body language and expressions of the characters, John K. is a genius when it comes to creating a mood through background and music. i love when the backgrounds go from being normal settings to surreal, splotchy spaces, indicating a character has snapped or is about to become unhinged. sometimes the music choices are ham-fisted and obvious, further adding to the comedy, but oftentimes they're beautifully in contrast to everything that is happening, such as his liberal use of relaxing classical music to scenes of disgusting things, or just plain absurdity.

i feel like he really dropped the ball with Adult Party Cartoon, but the classic Ren and Stimpy will never cease to amaze me. they just don't make cartoons like that anymore.

oh, i see what you mean, i should've probably clarified it a bit. XD what i meant in the opening was that i don't like the majority of the really old warner bros. cartoons that were about parodying people or things popular at the time instead of just being funny by virtue of dialogue, gags or the characters.

i do really like warner bros. for the most part, but not their "cheap laugh" dated parody stuff, which is most of the Merrie Melodies stuff. or the stuff that was bland and un-funny because they were trying to be too much like Disney in the beginning.

i forgot how much i loved those old grotesque Looney Tunes! actually, to take that one step further... i don't think i realized how much i loved Bob Clampett's stuff. i always hated those ones where you're in a restaurant and then there's the exaggerated celebrities... i think they did that since this stuff ran before movies. but anyway, point is, as much as i loved those weird animal cartoons, i never took the time to figure out which directors i preferred. so i think i need to go back and do some Clampett research!

after some brief research, i have decided i find them completely unwatchable. at least, most of the early ones. i think i need to check out some chuck jones stuff to see if i dig that more.

noooo! haha they're so good! well, you're right, the early ones are unwatchable. Chuck Jones is pretty good, yeah, but i should compile a list of good Bob Clampett cartoons for you to check out.

or maybe it's just me, and only i like them because i appreciate them on an artistic level. whoops. XD